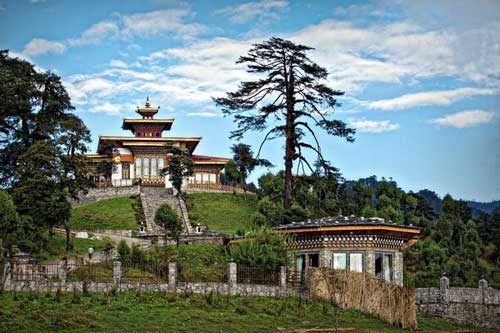 Bhutan is the only country in the world that officially practices Mahayana Buddhism or Vajrayana Buddhism. More than a religion, Buddhism is a way of life in Bhutan. Since time immemorial, Buddhism has shaped local beliefs, culture and identity.

Upon arrival met and received by our crew and drive to Thimphu 1hr. Thimphu is the capital city of Bhutan appx 100,000 inhabitants. Depending on flight timings can visit a monastery or the memorial stupa of the 3rd King of Bhutan, where you will see many elderly folks praying, prostrating and walking around the stupa.

Visit Changangkha Monastery: Built in 12th century, Changangkha Lhakhang  is one of the  oldest temple in Thimphu. It is hovering over a ridge above Thimphu near Motithang. Lama Phajo Drukgom Zhigpo who came to Bhutan from Ralung in Tibet chose this site to build this lhakhang/monastery. The Lhakhang houses Chenrizig: an 11-headed, thousand-armed manifestation of Avolokitesawara as the central statue. The prayer books in this Lhakhang are larger than the usual Buddhist texts. Zilukha nunnery in Drubthob Goemba: This nunnery is one of the largest nunneries in Bhutan just above the Dzong that overlooks the Thimphu valley. It belongs to Drupthop (The Realised one) Thang Thong Gyalpo from the 15th century. The saint had multiple talents including building bridges and metal works. Here nuns chant prayers and also dwell here.  In Bhutan girls and women  are admitted to nunneries for short to long period of time .From the nunnery they get an education. Finally  they dedicate their lives to serve the society. These nuns are very much  involved in local communities in Bhutan and helping needy families. Pangri Zampa Lhakhang is idyllically located in the middle of a meadow, not far from the river, a 20-minute drive from the lodge on the way to Tango and Cheri monasteries. The temple appeared in Zhabdrung Ngawang Namgyal’s vision which directed him from Tibet to Bhutan. The temple was built by Ngawang Choegyel, the great-grandfather of the Zhabdrung, and was the Zhabdrung’s residence when he arrived in Bhutan in 1616. Today, the temple is used as an astrologer’ss centre of the state clergy, and is the home to around 100 monks studying astrology. During a visit Pangri Zampa you can learn more about astrology, and also have your personal reading done. Visit Dorji Phangmo- Living goddess of longetivity. In Thimphu, there is a reincarnate Dorji Phangmo and a visit can be arranged for the interested.

Travel to the lush green valley of Punakha. 1 hr drive will take you to the Dochula pass at 3200m/10496ft. There are 108 stupas built by the Queen mother for the wellbeing of the Bhutanese people and the King. Weather permitting you will have great views of the eastern Himalayan range including the highest unclimbed mountain at 7500m/24600ft. When you are about to reach Punakha valley, visit the Chimi Lhakhang/Monastery, it stands on a hillock and was built in 1499 by the 14th Drukpa hierarch, Ngawang Choegyel, after the site was blessed by the "Divine Madman" the maverick saint Drukpa Kinley (1455–1529) who built a chorten/stupa on the site. In founding the site it is said that Lama Kunley subdued a demon of Dochu La with his “magic thunderbolt of wisdom” and trapped it in a rock at the location close to where the chorten now stands. He was known as the "Mad Saint" or “Divine Madman” for his unorthodox ways of teaching Buddhism by singing, humour and outrageous behaviour, which amounted to being bizarre, shocking and with sexual overtones. He is also the saint who advocated the use of phallus symbols as paintings on walls and as flying carved wooden phalluses on house tops at four corners of the eves. The monastery is the repository of the original wooden symbol of phallus that Kunley brought from Tibet. This wooden phallus is decorated with a silver handle and is used to bless people who visit the monastery on pilgrimage, particularly women seeking blessings to beget children. The tradition at the monastery is to strike pilgrims on the head with a 10 inch (25 cm) wooden phallus (erect penis).Traditionally symbols of an erect penis in Bhutan have been intended to drive away the evil eye and malicious gossip. Visit the Punakha Dzong, which displays Bhutanese art and architecture, with many monasteries inside the Dzong/Fortress. An evening can be arranged to meet a high reincarnate Lama called Kathog Rimpoche/Precious one who can share some wisdom.

Visit Nalanda Buddhist Institute and interact with monks. Nalanda Buddhist Institute is a small Drukpa Kagyu monastic school (100 students) in Punakha district, Bhutan. All monks in Bhutan receive a small stipend from the government, but the school is not state funded. Principal Sonam Tshewang is responsible for all resource mobilisation associated with running the school. On completion of their studies the monks go onto further monastic studies at higher learning institutions. The students often, but not always, come from rural backgrounds and the choice of becoming a monk is framed by economic hardships at home. At this early stage in their education, they have no ability to earn a living through praying for others (holding puja) and the school is responsible for provision of all their needs-food, healthcare, accommodation, clothing and education. Visit a farm house to witness the daily chores of Bhutanese farm life.

The Gangteng Monastery is an important monastery of Nyingmapa school of Buddhism, the main seat of the Pema Lingpa tradition. The Monastery, also known by the Gangten village that surrounds it, is in the Phobjika Valley where winter visitors – the Black-necked Cranes – visit central Bhutan to roost, circling the monastery three times on arrival and repeating this circling when returning to Tibet.The Monastery's history traces to the early 17th century and back to the prophecies made by the well-known Terton (treasure finder) Pema Lingpa in the late 15th century. The Monastery is one of the main seats of the religious tradition based on Pema Lingpa's revelations and one of the two main centres of the Nyingmapa school of Buddhism in the country. A Nyingma monastic college or shedra, Do-ngag Tösam Rabgayling, has been established above the village

Day 6. Gangtey to Khotokha and night at Punakha.

After a leisurely start from your lodge drive down to Wangdue, just before reaching Chuzomsa divert from the highway into another hidden valley called Khotokha, the road is not asphalted for about 20km.  Visit one of the largest shedras/monastic school called the Rinchenling Shedra. Interact with the monks and scholars at this Institute. Later 1 hr drive will take you back to your hotel.

Drive to Paro, stop by Thimphu for lunch, complete some last minute shopping, sightseeing of interest that have not been covered earlier. On reaching Paro, visit the Paro Dzong before heading back to your hotel. In the evening a meeting with a Historian will be arranged, who is also the Director of the national mueusem. His name is Khenpo Tashi and is also a monk lama.

Guru Padmasambhava, popularly known as Guru Rinpoche visited and sanctified Bhutan in the 8th century when evil spirits abounded and harmed people. Legend has it that Guru Rinpoche flew to this site on a tigress’ back to subdue a local demon. Thereafter, he meditated here for three months. Taktshang Goemba or Tiger’s Nest Monastery was blessed and sanctified as one of Bhutan’s most sacred religious sites. It hangs on a cliff and stands above a beautiful forest of blue pine and rhododendrons. Day 9. Paro. Kichu Lhakhang is one of the oldest monasteries in Bhutan and was built in the 7th century by the Tibetan King Songsten Gampo. Legend says that a giant demoness lay across the whole area of Tibet and the Himalayas and was preventing the spread of Buddhism. So on order to control her, King Songsten Gampo built 108 temples which are places on all points of her body. Kichu Lhakhang was one of the 108 monasteries.  Visitors are not allowed when there are religious ceremonies going on in the monastery. Later in the evening experience a religious ceremony: Living Treasures of Bhutan, the ceremony will be followed by the following events and will roughly last for 2 hrs. Tah Goen Thruesel. Sprinkling of blessed Amrita water on distinguished guests attending the “Living Treasure” ceremonial function. This particular blessing is to purify both internal and external negativity forces to be part and being able to  attend such a virtuous ceremonial accessions. Marchang Ceremony. Offering of wine to the celestial deities. After the distinguished guests are being seated, the wine offering ceremony to the deities are considered auspicious by seeking their magical power of protection to the congregation. Gegthray Ceremony. Wrathful Mask Fire dance to cleanse all the elements of negative energy. Performed by two mask dancers with fire torch and accompanied by ritual drum, cymbal and horn. Pazap Dance. Ancient Bhutanese Warrior’s victory dance. This war dance was always performed by a warrior general after having defeated their rival enemy to commemorate their victory. Lugar Shay. Traditional Bhutanese Folklore Dance. To rejoice and thank the celestial deities, for having blessed the congregation, folk dancers in their traditional costume perform three sessions of dance and song. Shingshay Pem. Ritual Dance of the celestial beings. This dance is performed by two monk dancers in its ancient original style, accompanied by ritual recitation by a prominent master. Nine person. Shukdrel Phunsum Tsogpa. Ancient Bhutanese Tea Offering Ceremony. This event is offering of various kinds of any eatable or consumable fruits or nuts to the distinguished guests, followed by butter tea and traditional Bhutanese snacks. Kaago and Jab Thrue. Blessings for long and prospective life span by an abbot. The blessing is conducted and presided over by an established abbot or Lama by pouring blessed amrita water over the guest’s head and is concluded by receiving the Sutra and Mantra recitation blessing and inhaling the burning incense.

Drive Paro in time for your departure flight.

Be the first to review “Bhutan Pilgrimage Tour” Cancel reply